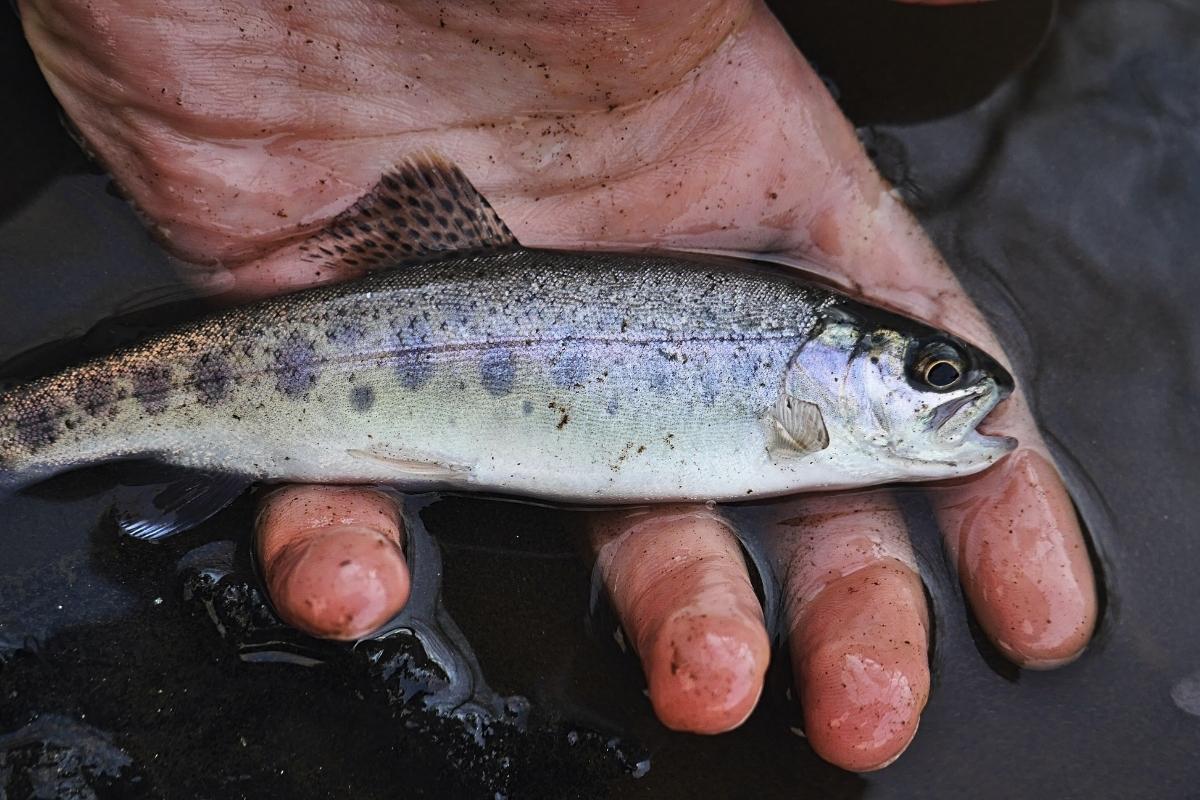 Identifying which species of trout you have caught or are fishing for is extremely important as there are may different state rules that govern what types of trout can be fished for and how and when you are allowed to do it.

For most anglers the four most common trout species that they will catch regularly will be:

There are also some common sub-species in certain regions and various hybrids such as:

Trout are freshwater fish species from the genera Oncorhynchus, Salmo, and Salvelinus, which are all members of the Salmoninae subfamily of the Salmonidae family.

Some non-salmonid fish have names that include the word trout, such as Cynoscion nebulosus, spotted seatrout, or speckled trout.

And then of course there is the Steelhead.

Steelhead, often known as steelhead trout, is the anadromous version of the coastal rainbow trout or redband trout.

Steelhead are endemic to the Pacific basin’s cold-water streams in Northeast Asia and North America.

Steelhead, like other sea-run (anadromous) trout and salmon, spawn in freshwater, smolts migrate to the ocean for several years of feeding, and adults return to their natal streams to spawn.

The rainbow trout (Oncorhynchus mykiss) is a salmonid endemic to cold-water Pacific Ocean tributaries in Asia and North America.

The steelhead (also known as “steelhead trout”) is a sea-run (anadromous) variety of the coastal rainbow trout or Columbia River redband trout that normally returns to fresh water to spawn after spending two to three years in the ocean.

Steelhead are freshwater forms that have been introduced into the Great Lakes and move into rivers to spawn.

Adult rainbow trout in freshwater streams weigh between 1 and 5 lb (0.5 and 2.3 kg), but lake-dwelling and anadromous varieties may weigh up to 20 lb (9 kg). Coloration varies greatly according to subspecies, forms, and environment.

Adult fish are characterized by a wide reddish stripe running from the gills to the tail, which is most prominent in breeding males.

Brown trout (Salmo trutta) is a salmonid fish native to Europe that has been extensively introduced into appropriate settings across the world.

They have spread across far and wide across the United States and can be found in small streams, rivers and lakes.

Brown trout tend to favor clear healthy waters with a rocky or sandy bottom that is supports a large range of insects for them to feed on.

The latter spends most of its life in the seas, returning to fresh water only to breed.

In Ireland and the United Kingdom, sea trout are known by a variety of names, including sewin in Wales, finnock in Scotland, peal in the West Country, mort in North West England, and white trout in Ireland.

Lake trout (Salvelinus namaycush) is a freshwater char that lives mostly in lakes in northern North America. Mackinaw, namaycush, lake char (or charr), touladi, togue, and grey trout are some of the other names for it.

It is also known as siscowet, paperbelly, and lean in Lake Superior. Lake trout is valued as both a game fish and a food species. Those captured with dark coloring may be referred to as mud chickens.

Lake trout have a rather limited range. They are exclusively found in northern North America, mostly in Canada, but also in Alaska and, to a lesser degree, the northeastern United States.

Lake trout have been extensively introduced into non-native waterways across North America and many other regions of the globe, mostly Europe, but also South America and portions of Asia.

The brook trout (Salvelinus fontinalis) is a freshwater fish species belonging to the char genus Salvelinus and the salmon family Salmonidae. I

It is native to Eastern North America, including the United States and Canada, but it has been imported to other parts of North America, as well as Iceland, Europe, and Asia.

It is also known as the eastern brook trout, speckled trout, brook charr, squaretail, brookie, or mud trout in certain areas of its range.

The brook trout is dark green to brown in color, with a characteristic marbled pattern (called vermiculation) of lighter hues over the flanks and back, reaching at least to the dorsal fin and, in some cases, all the way to the tail.

Along the sides, there is a conspicuous scattering of red dots encircled by blue halos. The belly and lower fins are crimson in hue, with white leading margins on the latter. When the fish are spawning, the belly, especially of the males, becomes bright red or orange.

It is a Pacific trout, which includes the widely dispersed rainbow trout, as a member of the genus Oncorhynchus. Cutthroat trout are a popular gamefish, particularly among fly fishermen.

The popular term “cutthroat” alludes to the prominent red colour on the lower jaw.

Cutthroat trout prefer small to medium sized, clean, well-oxygenated, shallow rivers with gravel bottoms to live and spawn. They spawn in lakes that are clean, cool, and relatively deep.

They are indigenous to alluvial or freestone streams that are common tributaries of rivers in the Pacific Basin, Great Basin, and Rocky Mountains. Cutthroat trout spawn in the spring and may accidentally but naturally hybridize with rainbow trout, resulting in viable cutbows.

Due to habitat destruction and the invasion of non-native species, many subspecies of cutthroat trout are presently categorized as vulnerable in their natural ranges. Two subspecies are considered extinct: O. c. alvordensis and O. c. macdonaldi.

Cutthroat trout are grown in hatcheries to restore populations in their native ranges and to supply non-native lake settings for fishing. Seven western U.S. states have designated cutthroat trout and multiple subspecies as their official state fish.

The Dolly Varden trout (Salvelinus malma) is a salmonid fish endemic to Asia and North America’s cold-water rivers of the Pacific Ocean.

It is a member of the genus Salvelinus, or real chars, which has 51 recognized species, the most notable of which are the brook, lake, and bull trout, as well as the Arctic char.

The term is a combination of speckled trout (another name for brook trout) and lake trout, and it was perhaps used to identify such hybrids as early as the 1880s.

Hybrids of male lake trout and female brook trout (dubbed “brookinaws”) have also been developed, but have not been as successful.

The fish is an outlier in the wild, with brook trout having 84 chromosomes and brown trout having 80. Records reveal incidents dating back to 1944. The cross is unique in that the parents are from separate genera.

Tiger trout can be consistently generated in hatcheries. This is accomplished by fertilizing brown trout eggs with brook trout milt and then heat shocking them, resulting in the formation of an additional set of chromosomes and raising survival rates from 5% to 85%.

Tiger trout are said to grow quicker than native species, however this is not universally agreed upon, and they have been regularly introduced for sport fishing.

The bull trout (Salvelinus confluentus) is a salmonid char endemic to northern North America. Previously known as the “Dolly Varden” (S. malma), S. confluentus was reclassified as a distinct species in 1980.

Bull trout are designated as an endangered species under the Endangered Species Act of the United States (1998).

A bull trout’s fins, like those of other char species, have white leading edges. It gets its name from its exceptionally huge head and mouth for a salmonid. Bull trout have been measured up to 103 cm (41 in) in length and 14.5 kg in weight (32 lb).

Bull trout may be migratory, migrating across extensive river systems, lakes, and the ocean, or resident, spending their whole life in the same stream.

The lack of conspicuous spots on the dorsal fin, as well as yellow, orange, or salmon-colored patches on the back, distinguishes bull trout from brook trout (S. fontinalis), as do red markings with blue halos on the brook trout. Bull trout lack the lake trout’s highly forked tail fin.

Hopefully by now you are in a better position to be able to distinguish the main types of trout that are found in North America and how the differ from each other.