Rapala trout lures have been producing big trout from the smallest rivers to the biggest lakes for years.

These lures keep on producing year after year when everything else fails. Have you ever been stumped by picky fish that just won’t bite on you favorite trout bait or spoon?

The Rapala may well be your answer. When fished at the right speed it can really take trout out of where they are hiding and tempt them into a strike.

Rapalas come in many different shapes, sizes and colors. For trout fishing however you only need to pick a limited few from the range.

The first Rapala was carved from pine by Lauri Rapala some time in the 1930’s. Whilst out fishing on his home waters he keenly noticed that the trout would always try to single out the weaker injured bait-fish from the schools.

These injured fish usually had a tell and it was how the moved. If a small bait-fish was moving in an erratic fashion then chances are it was injured in some way.

So he decided to imitate this movement and started to carve out the general shape that we still see today using only a sharp knife and a piece of pine.

To liken the swim to an injured bait-fish he added a small lip at the front to help the lure to dive below the surface of the water.

By adding some reflective foil from a chocolate bar he could also recreate the flash that small fish make as the dart through the water. And thus the first incarnation of the Rapala minnow lure was created.

Since then the Rapala has evolved to the modern lure it is today due to better materials and construction methods, yet it still retains the same characteristics and basic design as Lauri’s first lure.

Interestingly enough the thing that launched Rapala into a world wide success was that it was featured in “Life” magazine in the same issue that featured a retrospective of the movie star Marilyn Monroe following her death. That issue happened to be the highest circulated issue of the magazine and provided massive advertising for Rapala.

Each Rapala lure is individually tested in a tank at the factory to ensure the correct swimming action. This testing is down by very experienced craftsmen who know and understand how the Rapala minnow is supposed to move through the water.

Every Rapala that is tested is done so without a split ring or clip. Why? Because the addition of any kind of weight to the front of the fishing lure will effect how it swims.

All Rapalas should be tied with a loop knot. Rapala have provided detailed instructions in that best knot. 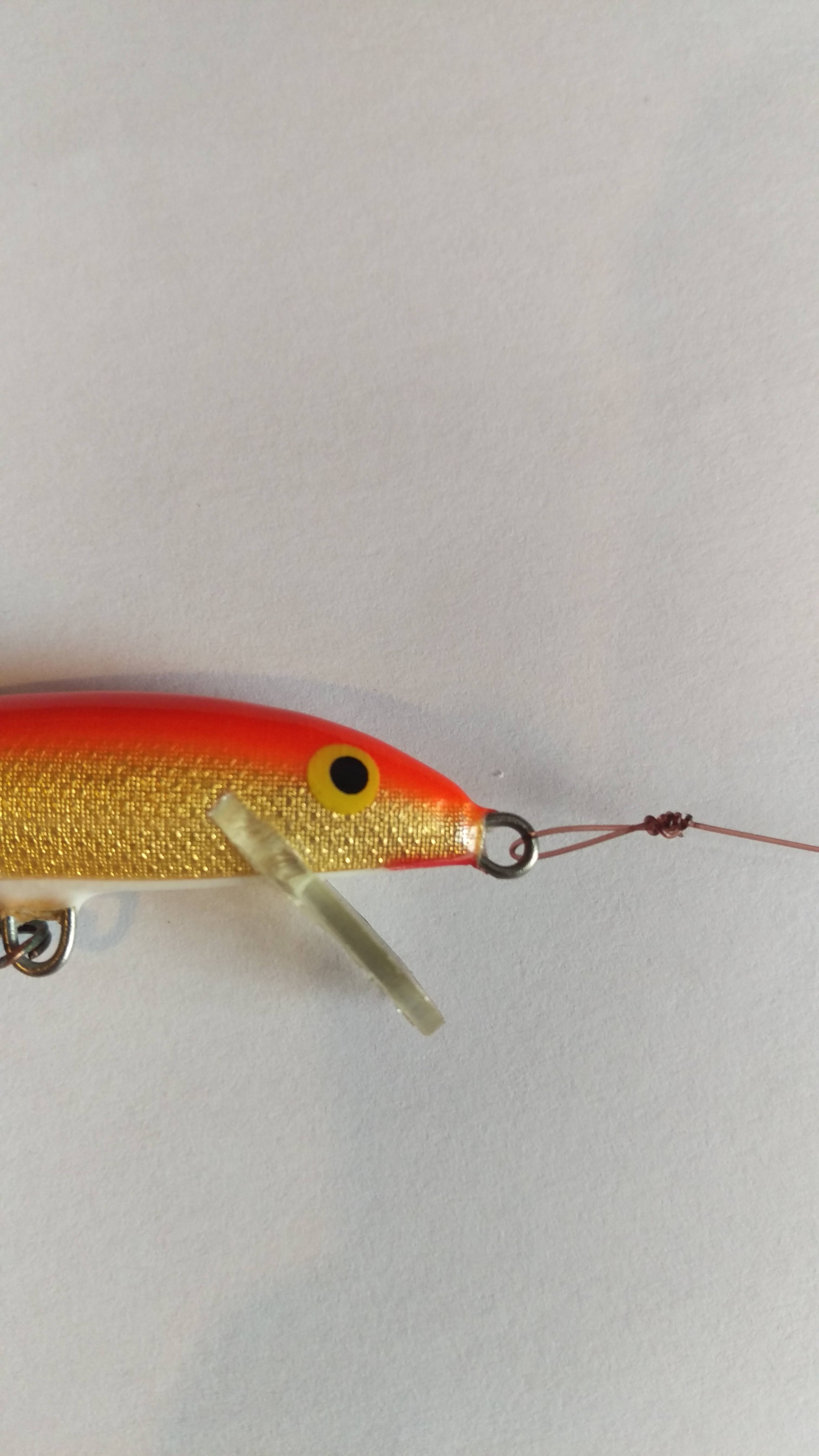 This knot forms a strong loop that allows the Rapala to swim correctly without any influence from swivels or snap links and if you wish to use your Rapala to the maximum effect on your fishing trips then I would strongly suggest using it.

Choosing which Rapala to use is pretty much governed in the same way as choosing any fishing lure for trout. Depending primarily on your venue(river/lake) and the weather, however other factors can come into play such as the season, depth, and type of trout you are targeting.

Our top colors for trout fishing with a Rapala would be:

Tiger/Orange
This patterns come into there own on cloudy water after rainfall. Despite the orange being somewhat unnatural in it’s appearance it is still responsible for landing some very large trout and can result in some very aggressive strike, however it’s definitely not for clear bright water.

What Size Rapala for Trout?

As a general rule I would stick to size 3,5 and 7 on smaller waters, so any small stream or river. If you are worried about casting the smaller sized Rapalas because they are so light, then you needed worry if you match the right tackle and line to it. Using an ultralight spinning combo should be sufficient.

Sizing a Rapala is not that hard. Depending on the depth and stretch of water you wish to cover will greatly effect which size to choose.

On the larger rivers and lakes then from size 7 up is best unless you are trolling in the shallows hunting out trout that are chasing schools of small bait-fish. Any size under 11 will have two treble hooks. From eleven upwards they will come with three treble hooks.

They do have a limit as to how deep they will dive regardless of how much line you have out. So if you are really looking to target trout down beyond ten feet or so you will have to use a downrigger setup.

The two main types of Rapala stickbait minnows that are used in trout fishing are the original floating and the countdown. If correctly chosen to match the water you are fishing they both can be as equally effective as each other.

Floating
Generally if fishing in streams or rivers I would recommend the Rapala original floating lure on light tackle.They are made from balsa wood and as a result are very light so you do need to use a light trout tackle setup and even then your casting distance will be limited

Unless you are targeting trout deep in holes and pockets then you may need the countdown.

Just be careful as when using the countdown there is a much greater chance of snagging something. However you can troll the floating Rapala in shallow water and that can be real effective especially if you can find a drop off shelf in a lake were the bottom moves from shallow to deep suddenly.

Countdown
The Rapala countdown for trout sinks at about a foot a second so if casting into lakes or trolling you can really get to fine tune the depth at which you are fishing. Is fine grained control paired with a fish finder on a lake can work extremely effective.

When trout fishing on streams and rivers as stated above I would generally favor the floating original Rapala. It can be very effective if cast across and up stream and then retrieved at the correct rate to hit your required depth. Using a steady retrieval rate can for the most part be very successful.

However, if you really want to imitate an injured bait-fish then the occasional pause of the lure combined with a slight twitch in the top of the rod really can up your chances. This twitching combined with the pause will mimic how an injured prey fish will behave and it’s not uncommon to get most of your strikes at this time.

Trolling for trout on lake

There’s no doubt about the big specimen trout are to be found in large lakes generally in the deeper water. Trolling has the one advantage over fishing from the shore in that you can cover a huge amount of water whilst the boat does all the work.

When looking to get down deep to where the fish are you can either choose to use weight to help or you can use a down-rigger. Both are perfectly valid.

The weighed method would require the use of a three-way swivel rig setup and is relatively inexpensive. It can also save you from loosing too many lures on underwater snags as the weight may get caught up first. If you use a lightly rated line to the weight it may break easier and you will still have the lure on your main line.

The down-rigger option is a more expensive and complicated setup however it may mean a more natural presentation of the Rapala as generally weighting these lures can effect their swimming action. Using a down-rigger like this is pretty common in larger lakes.

Another option is to use a lead core line that will usually sink a certain depth depending on how much you have let out. Just be sure to use a mono or fluorocarbon leader of about 8 to 10 feet.

When casting anything smaller than a size F07 you are going to need an ultralight trout ﻿spinning setup. Usually on 6 lbs trout line or less line. A good spinning reel for trout paired with a suitable spinning rod is best.

When trolling the larger sized Rapala trout lures you can use heavier line but try to keep the leader at about 8 lbs. To fish them down deep a downrigger setup can prove effective at getting a precise swim depth or lead core lines can also be used.