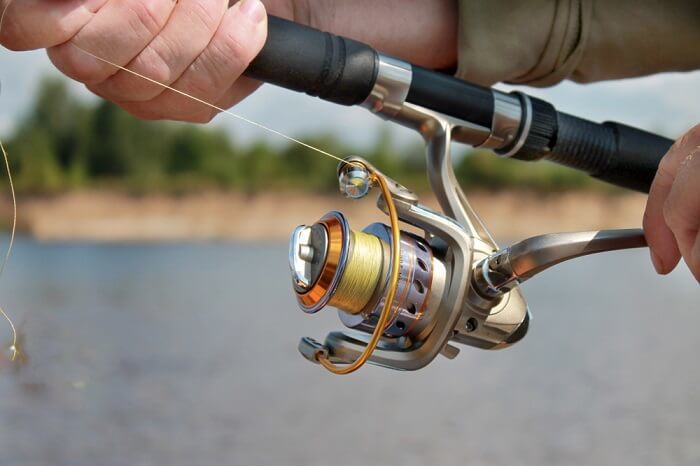 If you are looking to replace your steelhead spinning reel or are just starting out fishing for steelehead then choosing a decent reel is of vital importance,

Steelhead will burn a cheap reel in no time.

Hooking a freshly run steelhead and have it run down river with the current can be a death warrant to any spinning reel that has a subpar drag.

Once that drag goes the reel is practically junk.

Top tip: The most important element of any steelhead reel is going to be the drag, invest in a reel with a high quality drag system

Whether you are drifting salmon eggs or casting steelhead lures matching you rod, reel and line is crucial to getting the best performance from your tackle.

What is the best size spinning reel for steelhead?

The size spinning reels to use for steelhead would fall somewhere in the 2500 to 4000 range.

It really does depend on how big the steelhead are in your local waters and what rating of line you will be using.

At a minimum a decent steelhead reel should hold at least 110 yards of 8 lb mono. Ideally you should be running 12 lb monofilament or 20 lb braid as your main fishing line for steelhead.

You can use the following as a rough guide:

Just about any Shimano reel in a size 2500 or 3000 is a good reel for steelhead. On the lower end you have the Shimano Sedona and on the higher end the Stradic Ci4+.

The Stradic HGFK sits somewhere in the middle between the two. You get almost all of the higher spec design features and build materials as the Ci4+ but for roughly $50 less.

The major difference is in the materials used in the body. The Ci4+ uses a Carbon infused material for better anti-corrosion properties(as it is aimed at saltwater use) versus the FK which uses the cold forged Hagane process to make the body casing.

The Stradic FK is on of the smoothest reels you will ever use. The gear are cold forged(no cutting) using a process that Shimano call Hagane whereby the shape the gear teeth using extreme pressure rather than cutting.

This leads to not only much stronger internal gears but to them also having much tighter tolerances.

They all come with 6 main stainless steel ball bearings and one anti-reverse bearing.

Engineered to such a high level there is virtually zero warp in the body of the reel even when they are put under a lot of pressure especially from large steelhead.

Okuma make some fine reels and the Helios has been one of their most successful spinning reels yet.

It gives you near Shimano performance but at a slightly lower price point.

A size 3000(HSX-30) can hold 125 yards of 10 monofilament and has a max drag rating of 13 lbs. It comes with no less than eight stainless steel main ball bearings and one reverse bearing.

The body, side plate and rotor are all made from a specific long strand carbon fiber called C-40X making the components some 25% lighter than the equivalent graphite and almost 50% stronger.

The Helios has a multi-disc carbonite drag system that is as good as you will find on any higher end reel.

If you are looking for a lighter reel than some of the other options in this list then the Helios is a save bet especially if you are doing a lot of casting.

One thing is for sure once you get into the size 3000 or 4000 spinning reels the weight of the reel and how it affects the balance of your especially if you are throwing lures all day is something that needs to be taken into consideration.

If you have ever heard of Pflueger reels then chances are you have seen either the President or the Supreme.

The President is more an introductory model and makes a pretty good ultra light spinning reel but of you are looking to beef things up a bit then it is the Supreme XT that you should be looking at.

The Supreme XT is the flagship model from Pflueger and is in a different class to the President. It is a mid-range reel the offers great value for money.

It includes a fully sealed carbon drag system that is approved for saltwater use, and a whopping 10 stainless steel ball bearings.

If you are using braid as your main line then you be happy to hear the the spool on the Supreme XT is braid ready so no need for an additional backing.

The Spinfisher VI as the name suggests is the sixth version of one of Penn’s most successful spinning reels ever.

The Spinfisher V was a massive success and quickly found favor with many especially in the salt water arena.

And like most reels that Penn produce they are built to an extremely high quality standard.

Most Penn reels should last you at least ten years if they are properly maintained and serviced regularly.

With VI Penn have introduced a size 2500 for the first time in the line up which is perfect for steelhead fishing.

The Spinfisher is all about drag and features HT-100 drag washers that are made of carbon fiber. On the 2500 size that means a max drag of 15 lb.

The Superline spool is completely sealed so that drag system stays perfectly protected even in heavy salt water use but you should still give it a proper rinse with fresh water of course.

It is a little heavier at 10.7 ounces but that extra weight is due to it being somewhat over-engineered and it will last a lot longer than a lot of other spinning reels.

Looking for a great performing reel that can cast lighter lures a country mile ? Then the Revo SX from Abu Garcia may well be what you are looking for.

The Revo’s line management uses a combination of the Rocket Spool Lip and Everlast bail system to help line glide off the spool with ease.

The lip has been heavily tested to reduce friction on your line as much as possible and the Everlast bail system lays the line down flat and as evenly as possible.

When choosing a spinning reel for steelhead fishing you should look at a number of factors and features that all decent reels should have in common:

If you are casting all day long then the weight of a spinning reel can become an issue.

Most reel manufacturers will pride themselves on making their reels a light as possible.

Although making a reel lighter is fairly easy the real skill comes in reducing the weight whilst also maintaining the quality and the durability.

On the lower end a high quality size 2000 reel will rarely weigh less than 5 ounces and some especially if they are built a little bit heavier for salt water use can weight up as high as 10 ounces.

There is a sweet spot in the middle however. Pairing a heavy reel with a light weight graphite steelhead fishing rod can be a disaster as you will significantly affect the balance of the rod.

For a lot of steelhead fishermen cost is a big factor when it comes to buying a new reel. Let’s face it a lot of steelhead rods and drifting/float gear can become seriously expense especially if you are buying a high end centerpin reel and matching rod.

But you shouldn’t need a second mortgage to buy a decent steelhead spinning setup.

Can you buy a good steelhead spinning reel under 100, yes of course but the real sweet spot for a mid-range reel is to be had between 100 and 200.

A higher end Shimano Stradic Ci4+ may well be super smooth but for 50 bucks less there is 4 or 5 reels that available on the market with almost similar performance.

Let’s face it steelhead are not easy on your fishing gear. When they run they run really hard and it is your reel that takes the biggest beating.

The best steelhead reels need to have a super solid drag, internal gears and be well able to take a few knocks especially when you lay it done on a river when landing a fish.

A good reel can last at least ten years providing you really look after it. You should service your reel regularly depending on usage that can be once ever year or only ever three years or so.

Either way all the internals should be striped cleaned and re-greased at least once every three years at a minimum.

Drag performance and durability need to be considered when choosing a fishing reel for steelhead.

I would look for a minimum drag rating of at least 12 lbs preferably 15 lbs.

Materials wise carbon fiber drag washers are considered the top choice as they will rarely if ever overheat and seize up, that’s not to say that they are bullet proof however.

Line capacity will be dictated by what breaking strain line you are using. Regardless of the line rating you are using you should be able to hold at least 110 yards of monofilament and 220 yards of the equivalent braid.

If you are fishing on smaller tributaries or rivers there is a very low chance that you will actually get spooled(use up all your line) it is still really nice to know that you have a decent amount of line in reserve.

On large waters then it is an absolute must to have a good bit of line on your reel as it is not uncommon for a steelhead to strip 50 yards or so of line in the blink of an eye.

Stainless steel bearings are an absolute must on any high performance reel.

Just bear in mind it is not always the number of bearings that indicate how smooth the reel will run rather the quality if the bearings that is important.

Generally speaking you should have at least 5 main ball bearing s and one anti-reverse.

The materials used in modern reels have certainly progressed even in the last ten years.

For big powerful fish like steehead a reel shouldn’t really have much if any graphite on it.

Although graphite may be okay for a lighter reel it really is not that durable or rigid and any reel case that is built from it can suffer from a lot of warp once put under pressure from a running fish.

Stainless steel, carbon blends and aluminum are the types of materials that are found on most high quality spinning reels.

For most fishermen the spool is usually something of an after thought. Yet it is one of the most important features of a reel.

It has a direct effect on casting performance. The shape of the spool lip can vary wildly between manufacturers and any brand worth it’s salt should be spending a significant amount of time refining and testing the profile of the spool lip.

When mentioning spool design you also need to take into account the other element of the line management system which is the line lay.

How the oscillations of the bail arm lay the line on the spool can be crucial to getting the very best casting distances and accuracy.

Lie needs to be laid flat and evenly across the width of the spool.

Personally I don’t like a slow retrieval rate on a spinning reel for steelhead as if they turn on you and start to run toward you your reel really needs to be able to keep pace with them and ensure there is no slack line.

When fishing on smaller rivers this is really not a big issue but on any kind of open water or large river then it really is best to have a decent pick up speed on your reel.

This will mostly be a function of the size of your spool and the gear ratio of the reel. Look for at least 6.0:1 if you really want to be able to pick up line quickly.