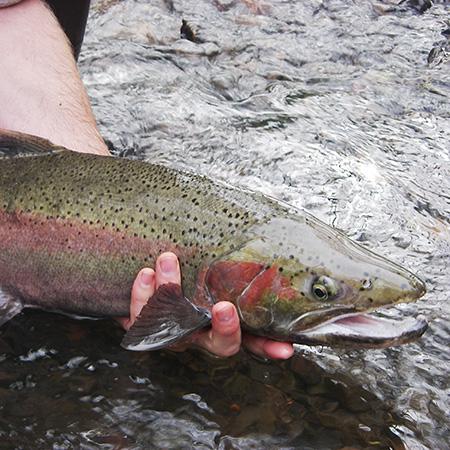 For most anglers the first choice when fishing for steelhead will probably be the best steelhead bait of all time salmon roe or eggs.

However as good as natural bait is sometimes they will turn their noses up at such presentations.

Artificial steelhead lures are particularly effective in the early season.

The best steelhead lures are all about flash and vibration or imitating a small injured minnow.

Casting, back-trolling and trolling for steelhead are all methods that allow you to cover a huge amount of water in a very short time.

This can be a real advantage when you are not familiar with the water that you are fishing.

Minnow baits, plugs, spoons, and spinners are the go to lures for steelhead.

Depending on the type of water you are fishing just a handful of each type of lure should be more than enough to cover almost situation.

The Acme Little Cleo is probably the all time favorite small spoon used by steelhead anglers. They are somewhat thinner and thus lighter than a Kastmaster and as such this gives them a different swim action.

As they are slightly lighter the are particularly effective in low water conditions in summer.

The patterned blade gives off a great shimmer when retrieved. I tend to stick to the gold and chrome varieties when choosing which colors to use but every river will be different.

Allow it to sink down near the bottom before you retrieve. A slow count can be used to gauge how deep you are going.

The Hot Shot has pretty much sewn up the title of best steelhead plug. It is a very popular choice when back trolling or even drifting.

They can also be cast and allowed to swing back down river with the current, although this is not as popular a technique as back-trolling

Hot Shots oddly look like they are only half a lure, but that weird body shape is what gives them their distinctive swimming action. They have a very pronounced diving bill that when combined with their short body makes them dart and move through the water very aggressively from side to side.

The Kastmaster is a very thick and stout little spoon. It is considerably thicker than some thing like the Little Cleo.

I like to stick to the chrome and gold varieties. There a decent range of colors available but classics like chrome/blue and plain gold and chrome are absolute killers if you can get them to cross the path of a aggressive steelhead.

Although the Rapala Original floating is a very light lure for casting it does allow you to really work shallower waters with absolute accuracy. They don't dive that deep and all you need to adjust the depth to which they go to is to very your retrieval speed.

Color wise silver/gold on clearer waters and sometimes a pattern like rainbow trout or firetiger if things are a little duller.

The Blue Fox Vibrax is an absolute killer of a spinner for steelhead. The blades are specially designed to emit a flash and a low frequency vibration through the water as it is retrieved.

They can be fished either fast or slow and each approach will give a very different action to the lure.

Fish them fast if you want to run shallow and cover a lot of ground or slow if you want them to be worked down deeper.

They come in a huge variety of blade patterns and body colors and roughly seven different sizes/weights.

For most anglers the choice of steehead lure will usually come on the recommendation of a local who knows the water and just what type of lure steelhead are likely to strike at depending on the time of year and how strong the steelhead run is.

However, if you are new to a particular stretch of water and do not have the advantage of local knowledge at your disposal then you can try a number of different approaches to help.

Personally I like to work a particular stretch of river in a fan like casting pattern. With an aim to position either a spinner or a spoon right in front of where I think a steelhead might be positioned at.

Larger deeper pools are fished at a slower pace to allow the lures to get down a little bit deeper. Often you will find that steelhead are aggressively striking at lures if you happen to place fish them through what the steelhead considers it's little patch or territory.

When running a lure through shallower waters I like to use a floating minnow stick like a Rapala. Even though they are quite light and harder to cast long distances in the smaller sizes they can be worked easily in the top six inches to one foot of the water column.

You can even cast them out and just let them float down stream with the current. A great trick is to routinely twitch your rod tip as they drift, which makes them break the surface tension of the water ad create a little ripple on the water surface.

You have a choice of either a spinning rod for steelhead or a casting rod.

For heavier lures a casting rod and reel for steelhead is what most anglers will favor.

Most salmon steelhead rods will be spinning rods but baitcasters are growing in popularity.

Once you start to use lighter smaller lures however a spinning rod and spinning reel for steelhead is always going to be the best choice.

Spinning gear gives you much better casting performance when you are using lighter lures as the line can slip off the spool much easier than if you were using a baitcaster rod and reel.

Line will either be braid or monofilament in the 8lb to 15lb range. Mono is a little bit more forgiving especially of the steelhead are aggressively striking.

It has a good deal more stretch in it than braid and this helps to act as a shock absorber thus reducing the chances of a break when you strike.